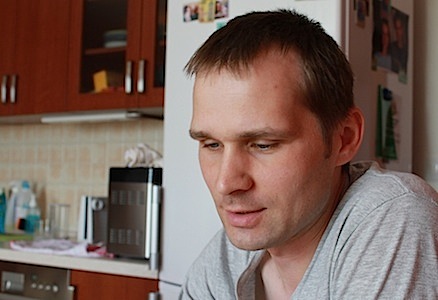 My name is Robert.

Some time when I was a teenager, I began to perceive a big need to get to know the meaning of my life. I longed for a full life. I looked for it in relationships, in success in sport, business, but it still wasn’t ‘it’. There was still something missing, even though it was sometimes even OK. I put a certain hope into becoming independent, when I was admitted to university and I was moving to the student residence. In the first months, I tasted freedom I had never known before. I enjoyed the student life.

Then I met people who wanted to talk to me about life and Jesus. Until that time, I hadn’t realized that there is something like God above us. Then I heard about Jesus for the first time, with whom it is possible to communicate, who loves me even if he knows about all the bad things I do, and who died just for these things on the cross and he offers forgiveness to me and also just the life I long for; meaningful and fulfilled. Only if I let him live with me. It seemed a bit ideal to me to be true, but I had to start thinking about it. I also resisted the idea that Jesus would live with me and that he would talk to my life.

Those people encouraged me to try to speak to Jesus. I admitted that there is nothing to lose, and so I told him something like this once: “Jesus, if you really exist, let me know you.” It wasn’t immediately, but after a while God began to answer me. One answer was that I started to see some things in my relationship with a girl I was dating. Very soon, I realized that I was in love with the lady on one hand, but at the same time I didn’t really love her. I rather needed her, so that I wasn’t alone, I searched for fulfillment in this. Suddenly, I didn’t need her relationship any more, and I began to think more about Jesus. Not that I lost my interest in girls, but I simply discovered something from a completely different dimension.

I began to read some books about Jesus, and something from the Bible, too. I was also deeply touched by a story of one man, whose father was an alcoholic, and drank so much that they had to tie him to the barn, so that he doesn’t do any harm. When the man accepted Jesus into his life, he could forgive his father. This persuaded me that Jesus is not only able to do unusual things in my life, but that I can trust him that he will do it in the right way. The man wrote in his book about the way he accepted Jesus into his life. I did it in a similar way. I told him something like this: “Lord Jesus, thank you that you died for all the bad things I’ve done when I lived without you. I know that I can’t live a meaningful life, I need you. Please, enter my life and fulfill it, lead me and change me.”

Then a process began, when I learned to communicate with God, to talk to him about everything that I experience. He has been showing me things that aren’t good and where he wants to change me. I haven’t been looking for the meaning of life and fulfillment since that time, I have found it, and I’m still finding it in the friendship with Jesus.

Have you ever tried speaking to Jesus? It’s not so difficult.

“Now this is eternal life: that they know you, the only true God, and Jesus Christ, whom you have sent.” John 17:3